I was finally feeling a smidge better; just clear enough that I could read some of the literature I need for my prelim and feel confident that I could cognitively process and make connections on a level that I needed to. Something I’ve been having the hardest time with lately. Why, oh why, has my thinking gotten so slow and difficult? I misuse words- often saying something entirely different than what I mean, even if I recognize it immediately. I feel as if my brain is swimming in cloudy jello. Its so much effort that I’m not used to putting into thinking, and not high level, innovating, working on ill-structured thinking–I’m accustom to working really hard at that– just basic thinking.

So I finally feel a bit of a break in the cloudy jello, and I get one chapter down and eagerly start on a second when all of a sudden I notice I’m not breathing. The same kind of thing that happened on the percocet. I doubt I don’t breathe for long, but it’s long enough to notice and feel short on air and my brain to go “OH SHIT BREATHE IN DAMN IT.” And then I can barely get air in. I tried counting my breaths in and out, with a longer exhale. I tried changing position. Nope, nada. So I break out my inhaler.

I don’t know I’ve said this before. I hate my inhaler. It makes me all jittery, and my brain has a hard time focusing, and it really only barely helps my breathing. Thankfully I hadn’t needed it all winter. I hadn’t taken a puff since August. But tonight I had to. Two puffs at 9:00pm.

And I still have to consciously think about breathing. If I don’t concentrate I’ll catch myself not inhaling again. At least my lungs feel like they can get air when I inhale, but I guess I’m done with work for the night. I certainly can’t focus on my reading, and meaning building, and conceptualizing while every second I have to pay attention to breathing. It’s been hard enough to write this damn post. And thank goodness for the easy ability to edit on via computers, or else this would have been an illegible mess, I’ve misspelled about every other damn word, hit the wrong button for delete over half the time, and had to take many breaks to string my thoughts together while thinking about getting air.

What a lovely way to end my day. As if all this health stuff wasn’t getting to me lately anyway. And I wasn’t already feeling awful about the amount of attention and work my academic career has been getting.

Like yesterday, I’ll be doing my best not to breakdown and cry myself to sleep. At least the amitriptyline helps me fall asleep, even if I have been getting flashes in my vision again by the end of the day.

I made myself a little armadillo yesterday. He fits in the palm of my hand, and can roll up into his shell. My husband suggested I keep him in my purse for anytime I start feeling down or unhappy. Then I can take him out to cheer me up, or distract me. I love the idea. I need to make a little “home” for him with some scrap fabric, so my keys don’t catch on the yarn and mess him up. 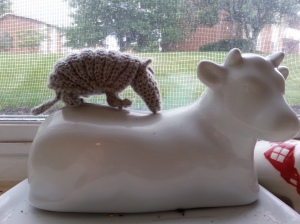 Crochet armadillo standing on the cow butter platter my momma brought me to decorate my kitchen. My naughty kitten got in my plant in the windowsill and knocked some of the dirt onto the platter.

Crochet armadillo. His face isn’t the prettiest thing. The pattern was worked in half double crochets (US terms) which left some gaps on his head where you could see the stuffing. I used a long tail of yarn to ‘sew’ over these spots and hide the stuffing. He isn’t perfect, but I think that’s part of his charm. 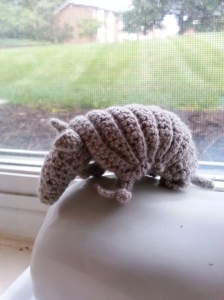 Crochet armadillo rolled up in his shell.

I just got back from Dr. S’s office.

She thinks the left sided pain may be referred pain from my gallbladder, and that surgery is our best option at this point, but understands my reluctance, especially since the change of resolved problems with atypical symptoms is 41%.

So she’s agreed to do the ultrasound and run the blood work for pancreas function (amylase and lipase) when I asked her to. The ultrasound and blood work is scheduled for the 2nd. It’s pretty much the last test we can do to give us any indication if its the gallbladder, short of removing it.

So, if those results of the ultrasound and blood work don’t give us any new information that contradicts surgery, then I agreed surgery would be the best next move.

Every time I go to her office, I bring a report of everything that’s been going on since my last appointment. My reports have included information about my bladder being reluctant to empty completely, the pins and needles I get in my limbs, and the random muscle contractions that occasionally occur in my right leg– most often before bed (which she said is normal) but also have occurred when I am awake (she said that is not normal). She thinks I should see a neurologist. So I’m going to look into if I can go to the student health center over the summer, and get the student health center to refer me to a neurologist, since the insurance will pay more of the bill (90% instead of 80%) that way. If I can’t go to the student health center over the summer, Dr. S said she can refer me to the neurologist.

I really like Dr. S, and am so glad she listens to me and validates my effort, thoughts, and research into my own health. In my experience, it is rare that a doctor does that. She’s one of the good ones, which makes up for the incredibly slow speed of her office, and why I will continue to see her as long as I need to.

Now I just need to think about the financials. It’s stressful enough that my health causes “speed-bumps” in my academic work and mental functioning (I have had some cognitive dysfunction lately, often switching a wrong word for what I mean to say, and making mental connections is slower than I’d like… Which is NOT conducive to working on my preliminary exam this summer.) But the financials are getting pretty tight. Graduate students don’t make much money.

I have an annual $3000 out of pocket max on my insurance. I need to find out if the “year” is the calendar year or the school year. It’ll make a big difference if my out-of-pocket max rolls over on July 1st, or January 1st. If I’m going to have that surgery this summer, and see a neurologist- with more tests I’m sure, I really want to know if I’m looking at a new $3000 bill, or if it will be less since I’ve had, and paid for, procedures so far this calendar year.

With feeling worse, my depression is getting worse. That combination has, of course, led to even less work on my prelims, which in turn makes my depression worse.

And today, I’m am trying to think of something positive, even though I feel as if I’m only being held together with scotch tape and popsicle sticks. My mantra is: there has never been a day you haven’t gotten through so far. You’ll get through this one too.

Had some serious left sided upper abdominal pain today, and have been feeling like shit lately. I’m so glad I’m seeing Dr. S on Friday.

Depression has been hitting me hard the past couple weeks.

My depression usually manifests as an unyielding and overwhelming lack of interest and motivation. It’s been making working on my preliminary exam, which I really need to work on, incredibly difficult. I’ve been crocheting small projects in a desperate hope that completing something, anything, that I put effort into will pull me out of this tail spin, but it hasn’t helped.

I met with Dr. S on May 22nd. We discussed how the low FODMAP diet results were inconclusive, and she suggested that I stop the diet. She also sent me in for the HIDA gallbladder function test.

Today I got the results back. My gallbladder is ejecting at 24%, where it should be at 37% or higher. The nurse told me I could either come in and talk to Dr. S again, or be referred directly to a general surgeon to have it taken out.

I elected to go back and talk to Dr. S. My appointment is for June 26th.

The HIDA scan did NOT reproduce my bloating or cause any pain, so while my gallbladder may be functioning poorly, it didn’t reproduce or cause any symptoms. …Although I did blow up the next day after a goodbye lunch with a departing co-worker, and throughout the whole weekend after A and I went to celebrate A’s youngest sister’s graduation…and actually on and off the week since then, even after going back to low FODMAP foods in a desperate hope that something would improve. (It hasn’t).

I don’t see the point in taking out my gallbladder if it isn’t what is actually causing my problems. And I’m not certain it is the cause of my problems since the test didn’t reproduce anything, and from what I looked up, it seems that high levels of progesterone can cause gallbladder ejection to be low. Since I’m on 5mg of progesterone a day, I’m wondering if that is why my ejection factor is 24%. That’s something I’m going to bring up with Dr. S on the 26th.

I’ve also noticed that for a few hours after eating, whenever I burp I can taste what I had eaten- so I’m going to bring that up too.

I have been horrible with keeping up with my recipe posting! I’m going to keep the commentary on this post to a minimum and just share all the low FODMAP recipes that I’ve used lately but haven’t posted recently.